Many of us might not be familiar with PDF Audio Reader. It is a text to audio program that allows you to read your PDF text out load. In this article, we will introduce several popular PDF audio reader tools for Mac, Windows, iPhone/iPad and Android, which will help you learn how to choose the best PDF voice reader for your needs.

Part 1: What is PDF Audio Reader?

A PDF Audio Reader, on the other hand, is a text to speech software (TTS). Its primary purpose is to convert text into audio. In other words, it reads text out loud. Most PDF Audio Readers have the capability to read not just PDF files but also Word and web (HTML), Kindle and other text file formats. Initially the software was created to assist the visually impaired, but now all users can take advantage of the software. Many are trying to avoid eyestrain like in the case of writers proofreading their own work. They use TTS software to read their work back to them so they can take a little break from staring at the computer screen. In other applications, usually in mobile devices like smartphones and tablets, TTS Apps are used to convert important text messages and/or emails to speech when the user is doing something that occupies their hands and eyes, like driving for example. Others simply like to relax and listen to the audio conversion of an e-book or long article instead of actually reading the text.

Text2Speech is a PDF Audio Reader that can be used with Mac. It is downloadable from the (Apple) App Store and for additional features you can purchase or upgrade to the paid version Text2Speech Pro. This TTS comes with 10 voices, but if you are running OS X Lion 10.7, it gives you the option of downloading additional voices from iTunes. Mac devices running OS X Lion can also download upgrades to support 26 additional languages. Text2Speech also has a Windows version. 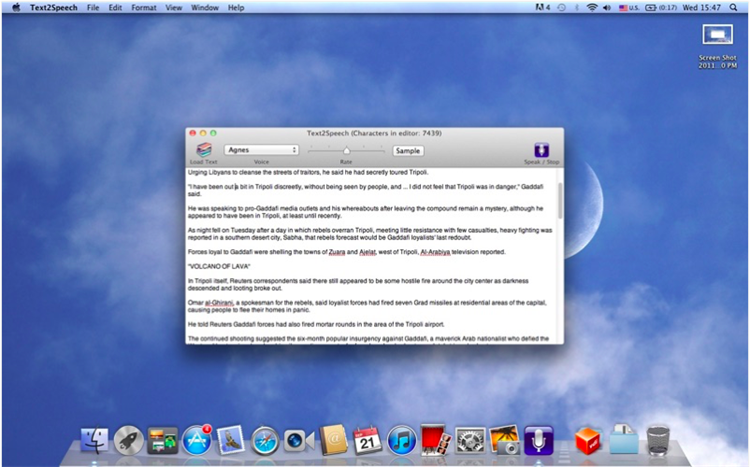 GhostReader is the Mac version of the PDF Audio Reader. It has almost the same features as its Windows counterpart, but includes the ability to bookmark audiobooks from your converted PDF e-books, a feature not found on the converted files of other converters. The downside of this software is that it can be a bit expensive, but you can add additional voices. A newly purchased Ghost reader can have as much as 20 license credits to purchase additional voices. 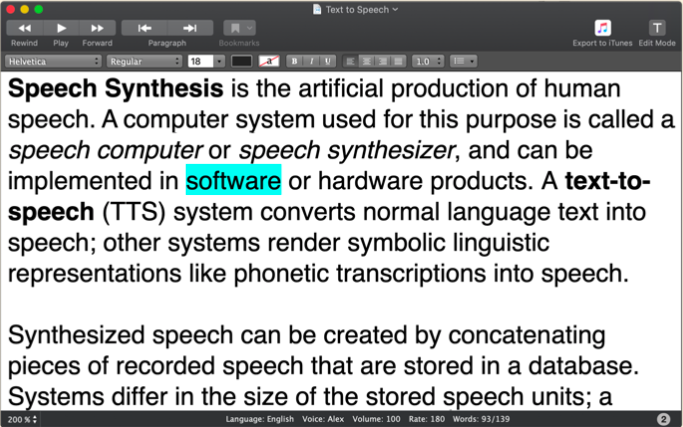 The Natural Reader is a download Text to Speech software available in both Windows and Mac versions and also offers a paid version with additional features. This software allows you to control the reading speed and lets you customize the voices. This version only has one female voice; the paid version has more voice choices and the option of saving the converted text as MP3, WAV, WMA and other audio file types. Natural Reader can open and convert Word, PDF, PowerPoint, and more and if the file is in an unsupported format you can always copy and paste the text onto the text area and the software can convert it from there. However, it does converts text in segments and during the transition between segments the words tend to get either mumbled or skipped. 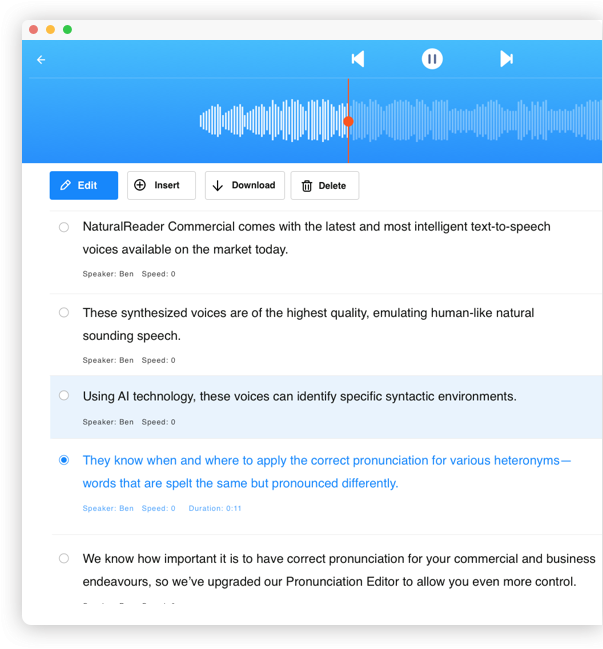 Balabolka is a Windows-based PDF voice reader, and since it utilizes Windows components, is not designed to work on a Mac. It utilizes Microsoft Speech API4 files to synthesize speech. Microsoft SAPI is usually bundled with Windows but if not it can easily be downloaded. Balabolka is capable of reading PDF, DOC, RTF, HTML and more. For unsupported formats, you can still copy and paste the text directly on the Balabolka window. It saves the converted file in a variety of formats including MP3, WAV, WMA and others. Balabolka is also highly customizable. You can change skins and it has the ability to download more voices online.

Dspeech is also a PDF voice reader for Windows that has all the standard reading and saving capabilities of top Text to Speech converters and more. Its support goes all the way to providing links where you can download or purchase additional voices. Dspeech also utilizes SAPI and other Windows components so it is light to download. What makes this unique is that it has the capability to reverse the process; it has a voice recognition function where it can convert the user’s captured voice into text. Dspeech also has an open source Multilanguage upgrade where you can download additional code to enable it to properly read other languages including German, French, Japanese and Chinese among others, You can visit their website for the complete list. The only issue with Dspeech is that it has conversion speed issues and it sometimes cannot pick up on context. 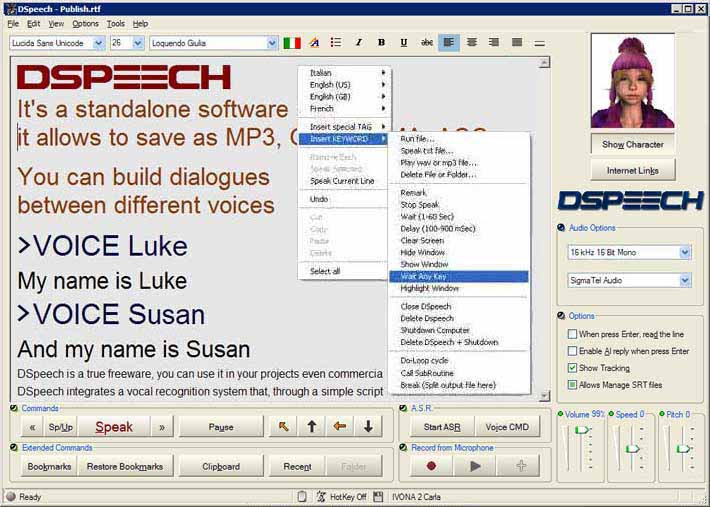 SVOX Pico is a version of SVOX and is often bundled in with the purchase of an Android device. The TTS is pretty functional but it has one of the most robotic sounding voices. A user needs to upgrade to SVOX classic to access additional paid voices. 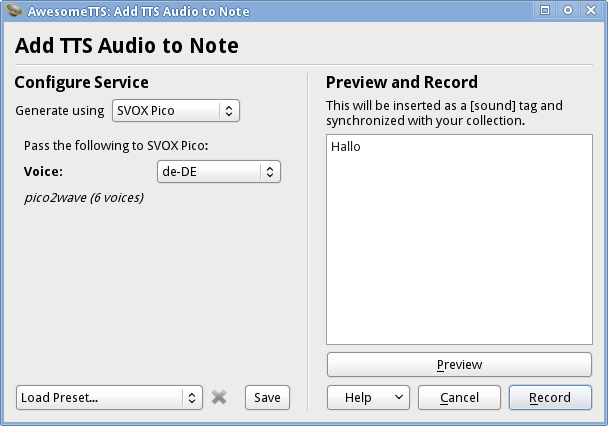 Voice Dream is a lighter version of Voice Dream for Mac. Despite being light it is still packed full of features and still boasts the same clean and easy to use interface. Some of its notable features include bookmarking for long documents and note taking capabilities. Unlike the Mac version though, it does not have the copy/paste option (Clipboard read) for unsupported formats. Voice Dream is optimized for both the iPhone and the iPad.

The Web Reader app is an iPhone TTS app optimized for reading web content like web pages, emails, blog and social network posts, and similar text files online. Standout features of Web Reader include its image-blocking feature to allow written content to load faster and auto speaking from background when multitasking. Web reader also works well with local sync apps like Dropbox. The downside with this App is that it is an iPhone only app and its features are more focused on online than offline functions. 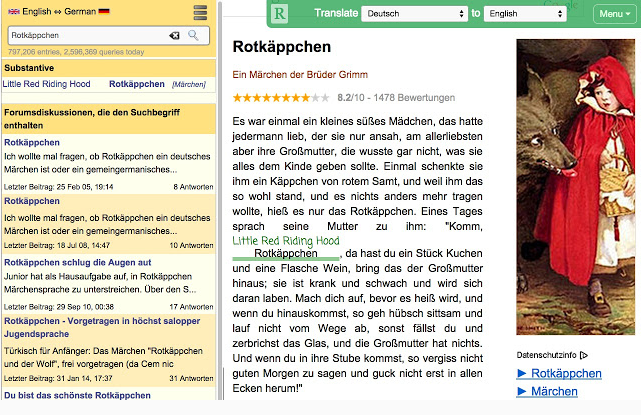